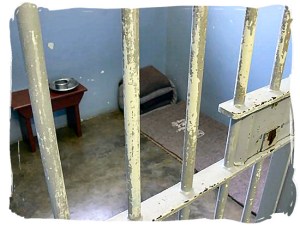 Out of the night that covers me,
Black as the pit from pole to pole,
I thank whatever gods may be
for my unconquerable soul.

In the fell clutch of circumstance
I have not winced nor cried aloud.
Under the bludgeonings of chance,
My head is bloody, but unbowed.

Beyond this place of wrath and tears
looms but the Horror of the shade,
and yet the menace of the years
finds and shall find me unafraid.

It matters not how strait the gate,
how charged with punishments the scroll,
I am the master of my fate;
I am the captain of my Soul.

Yes, I saw the film Invictus tonight, and I now feel compelled both to read Mandela’s writings, read more of Henley’s work, and to at least once in my life attend a rugby match.  While I encourage anyone who has not seen the film yet to do so (with the possible exception of Zell because soon his head is going to just explode from all this sappy stuff several of us have been posting of late – and I think he will thank me for saying that), and while I could quote the inspirational bits of the script until we all turned blue, this one is the one that most touched me — because if there is anything that I think the world at large and we as individuals need as much as inspiration, it is forgiveness.

I was thinking about how you [can] spend 30 years in a tiny cell and come out ready to forgive the people who put you there. ~Invictus (Francois Pienaar)

Think about that for a minute.  Seriously.

And then think about the forgiveness that maybe you still have not given.

Having a grievance or resentment is like drinking poison and thinking it will kill your enemy. ~Nelson Mandela

Forgiveness is about peace.

I don’t normally do this because I’m not a great fan of blogs that task the reader, so while I phrase it as such, please do not consider yourself tasked.  I don’t ask you to give you homework or even to ask you to share — though you are welcome to do so if you’d like; the beauty of the internet is that we at least have the opportunity to learn from every other person on the planet with bandwidth.  But I give you this prompt strictly in that effort, that I might share a thought that will maybe help someone toward finding their own peace.

Who is the jailor whom you have not forgiven?  We all have them – plural.  As we feel wronged throughout our lives, we keep a book and a tally beside the names inside.  Some people have their own page – maybe more than one.  Without forgiveness, we keep ourselves inside the cell even after the door has opened.  Without forgiveness, we continually fight to hold onto the anger and the fear and pain that we are so accustomed to, and we repeat the same cycle again and again, hurting ourselves all the more.

More difficult a journey than forgiving others may be that of forgiving ourselves.  My own experience has been that such as it is impossible to fully love another until you are able to fully love yourself, I’m not sure that it’s possible to truly forgive others until you are able to forgive yourself.  Both were lip service until I had the counseling to find my way to loving myself, and then I understood the truth of that statement.  Forgiveness has worked the same way for me, and forgiving myself has been a process that has required maintenance.  There is none so harsh a judge as oneself, and I have definitely had my moments when things aren’t going the way I’d like/hope/wish which make it very easy to wake up and find that I have wandered back toward or into my cell.

Are you your own jailor?  It is not enough to release yourself from your prison.  Love yourself, forgive yourself, and you will grant yourself the gift of peace.

Forgiveness liberates the soul.  It removes fear.  That is why it is such a powerful weapon. ~Invictus (Nelson Mandela)

I am the master of my fate; I am the captain of my Soul.